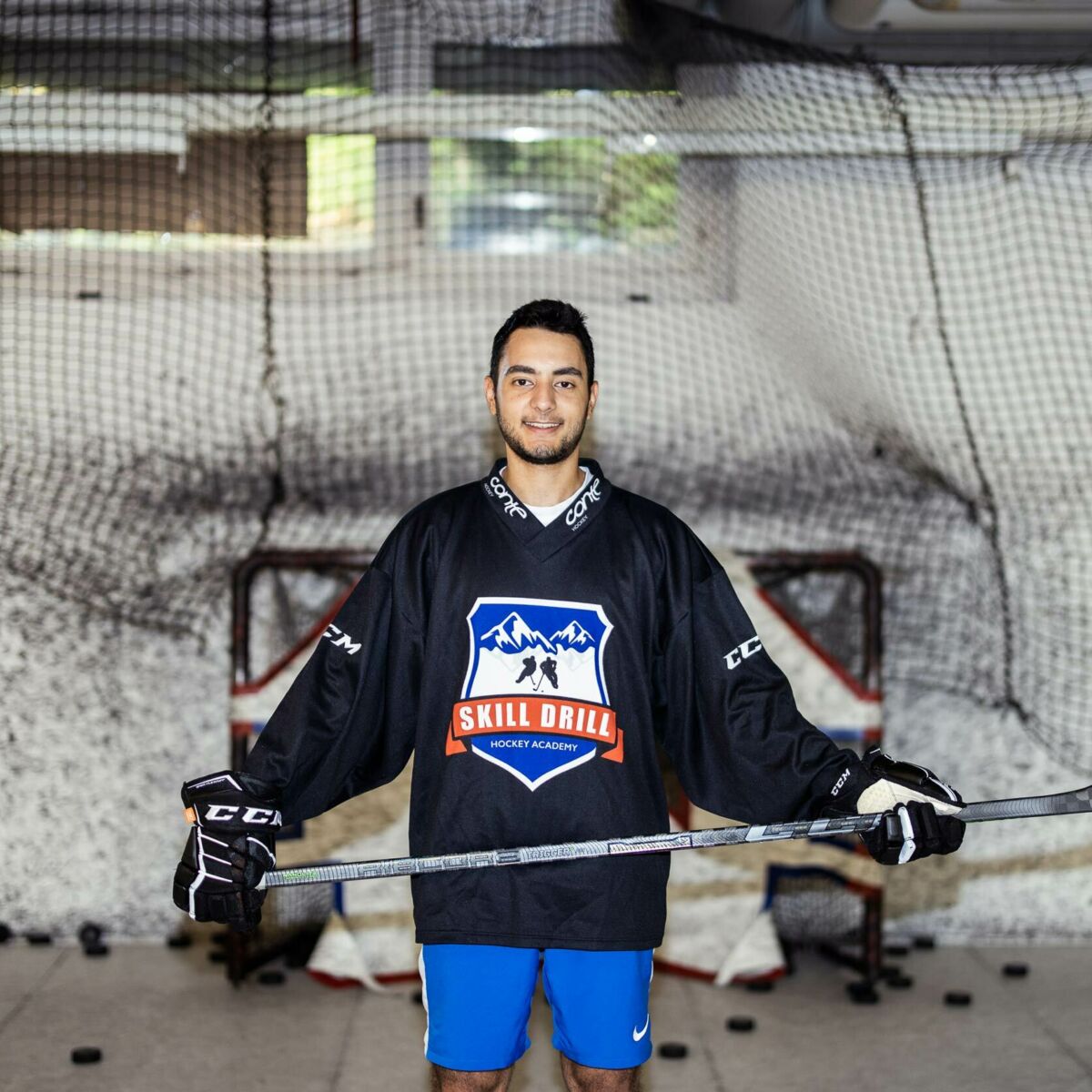 At the Skill Drill Academy, ice hockey players of all ages can improve their skating and shooting technique. Including legal assistant Alex Schmid.

“You’re good! You should play again,” says Ludek Kuncek, praising his pupil today. He stands in an artificial indoor ice rink spanning roughly 100 square metres and pushes the pucks to a man in hockey gear, gasping for breath. One after the other, they are hurled towards the goal. There is a colossal bang when the black rubber pucks impact. Just like in the stadiums of the National League A. To do this, the coach gives precise instructions, shows how to take the puck, how to ensure optimal acceleration. 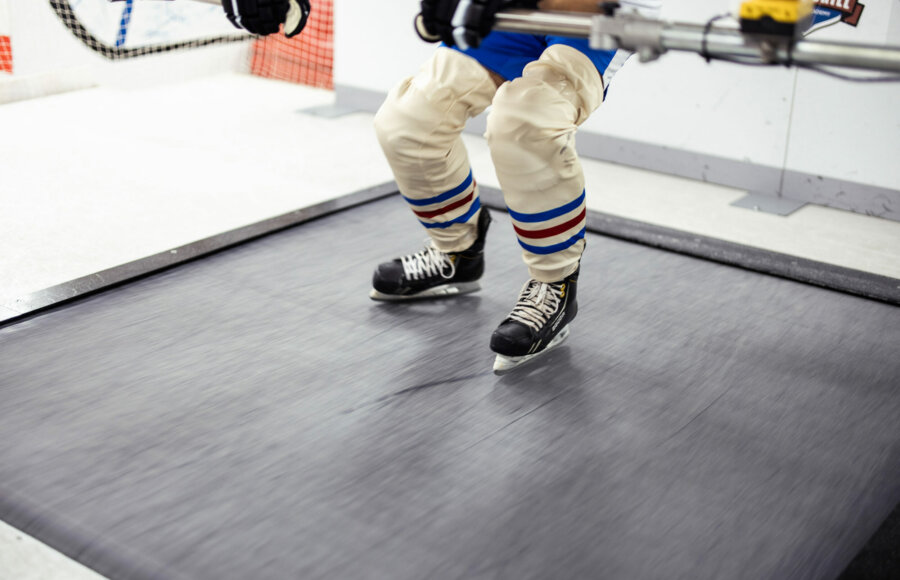 Here, in the former laundry facilities of “Waldhaus Dolder”, it feels like a real ice rink. Jerseys from clubs all over the world hang everywhere, dozens of hockey sticks with different elasticity are ready to be tested on a carousel stand, gigantic sports bags are waiting to be loaded and unloaded in the changing room. Even tables and seating are made from old sticks.

This is the realm of Kristian Ceniga (40) and Ludek Kuncek (26). One and a half years ago, the two Czechs launched the Skill Drill Academy here – as business partners and on-site coaches. A start-up dedicated to the targeted improvement of skating and shooting technique, regardless of seasons and ice conditions. The youth teams of the ZSC/GCK Lions train here, young athletes from all over German-speaking Switzerland come to improve their individual skills, and even some professional players are already taking advantage of the facilities. It is one of the very few freely accessible training centres of its kind in Switzerland. Anyone (and everyone) can book a session here and get advice from the Czech cracks.

No problem for a skilled skater, but a nightmare for an amateur.

In addition to the artificial ice rink and a well-stocked gym – where boot camps are held almost daily and some Walder Wyss employees also regularly work up a sweat – the Skatemill is the real heart of the Academy. A rubber roller belt that can be used to simulate skating. You skate in place while the belt spins with increasing speed underneath your feet, setting the pace. No problem for a skilled skater, but a nightmare for an amateur. In your mind’s eye, you see yourself lying flat on your face after just a few fractions of a second. Even if that is not possible: the instructor controls the belt, and everyone is secured in place. For the first few rounds, you hold on to two metal handles with your hands, practise pushing off and shifting your weight from one blade to the other. Only then do you skate freely, add the stick and concentrate entirely on training realistic situations on the ice.

Kuncek’s pupil today needs a few minutes to find his feet properly. Finding his way back to his feet: Alex Schmid, 26, played ice hockey intensively for over ten years in his youth. Up to four training sessions and one or two matches per week. He quickly knew that he did not want to become a professional athlete. “I have too many other interests for that.” And he is pretty sure that, ultimately, he lacked a bit of talent. That is why he let it go at some point and concentrated on his job and education – and his second hobby: music.

Before the session, he admits to being a little nervous. He has not been on skates for three years. He did practically no sports for three years. The worries are unnecessary. After a few minutes, the muscle memory kicks in: “Still got it!” he says with relief. The possibilities of the Skill Drill Academy amaze him. “I have never trained like this before,” he admits. “The possibility did not exist back then.” Skating and gliding techniques were practised on the ice as a team. This is where the detail, the fine tuning, comes in. But instead of chatting, he prefers to go back on the “ice” and chase a few more pucks. “For the first time, I really miss the sport.”

Alex Schmid, a 26-year-old from Zurich, has been working as a legal assistant at Walder Wyss for a year. He has been studying business law at the ZHAW since autumn 2022. After playing hockey for over ten years in his youth, he has not returned to the ice again for the last three years. After his intensive sports phase with the ZSC/GCK Lions, he devoted himself primarily to his other hobby: music. In his spare time he is a producer in the genres of hip-hop and R&B.

«We want to revolutionise the food system»

He also knows the rules of the kitchen